If you’ve seen the videos from our newest campaign, you’ve probably noticed the recurring appearance of a strange yet somewhat endearing character. CommunicaTRON (C-TRON for short) is the latest addition to our creative team’s prop box and the beloved star of Zendesk’s “modernize your customer service” campaign. Read on for an exclusive sneak peek into the production process, complete with mannequin warehouses and fake fire extinguishers… 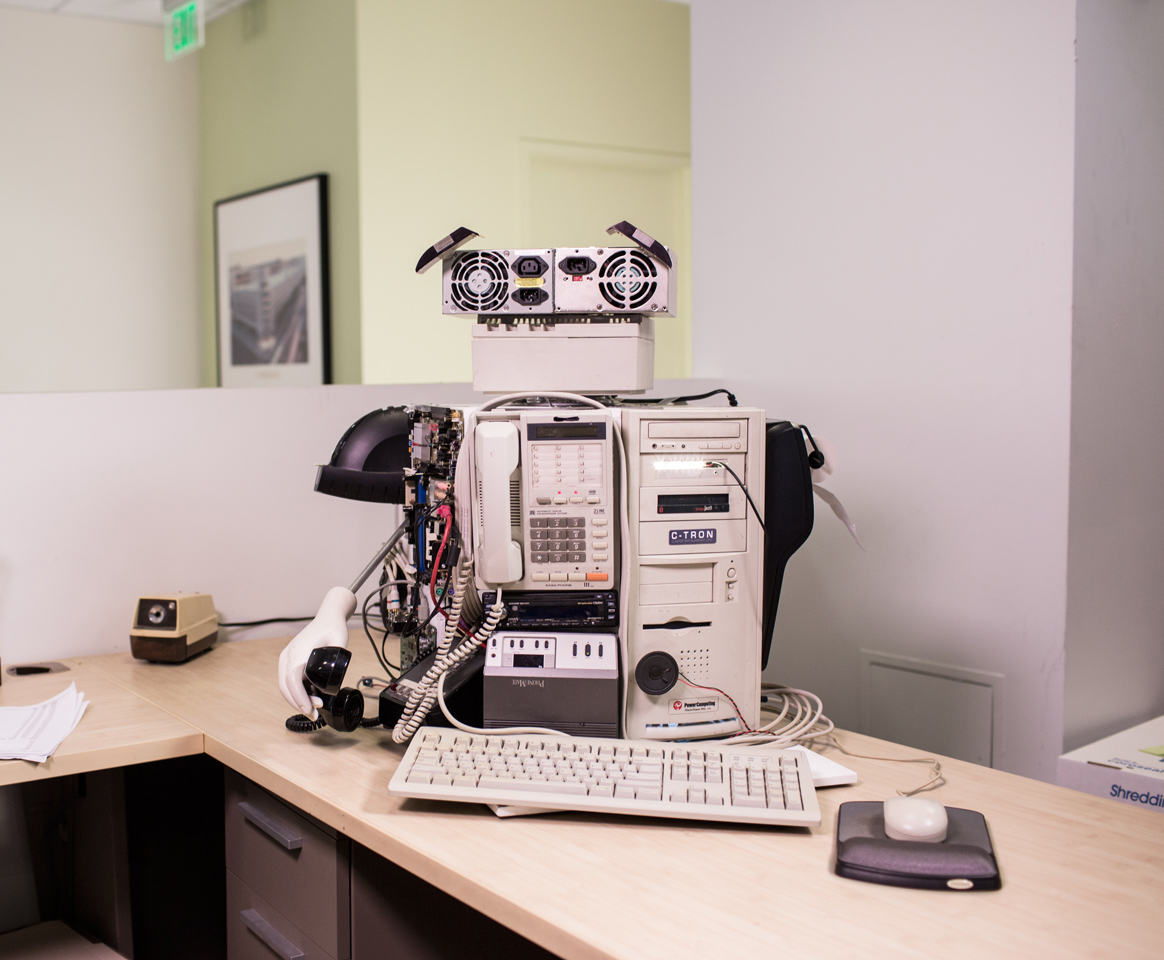 He may not look like much, and that’s kind of the point. C-TRON represents the outdated customer service technologies that many businesses still rely on, like impersonal message automation services or disorganized email management systems (we can help you with that!). There is inefficiency aplenty in the land of old-school customer service, and C-TRON reflects the lack of progress: your employees may be doing their very best, but they can’t reach maximum potential if their technology is holding them back.

“At first, we envisioned someone dressed up in a cardboard robot costume as a crappy representation of bad technology,” scriptwriter Ethan Kanat said.

“But we wanted to make sure that we weren’t aiming this joke at a person,” Kevin Cline, co-director and cinematographer, added. “The agent trying to do customer service is actually good and has the best intentions. It’s their tools that suck.” 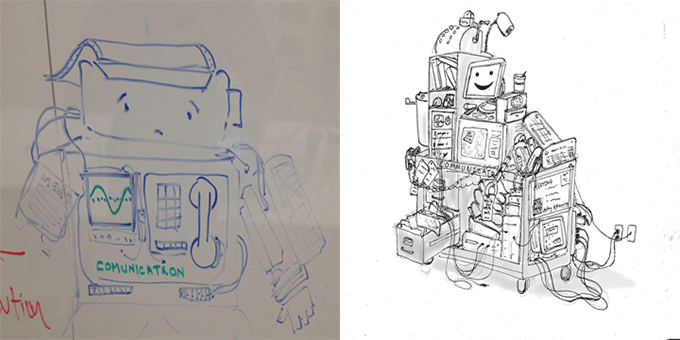 “C-TRON is a product of time and duct tape.” — Kevin Cline

With a more specific artistic direction in mind, the creative team set out to construct a character that reflects how companies cling to archaic customer support systems. Josh Warren, the prop designer who helped create C-TRON, assembled a variety of antiquated technology—answering machines and analog phones from a bygone era—and attached everything to a dot matrix printer. “A lot of companies in this segment are modern and high-tech, but when it comes to customer service, they’re using this homegrown, piecemeal assembly of different things,” Ethan said. Without a unified system for customer support, unnecessary problems arise. “When you start out as a small organization, those things can work just fine,” Kevin said. “But as you grow and succeed, they quickly become a burden.”

C-TRON also comes with a retractable mannequin arm that is surprisingly symbolic. “C-TRON has a high-five module and the only thing it does is give high-fives to reward performance, which would’ve been promoted as something way more important, like a cutting edge hardware upgrade to incorporate gamification into the customer service agent workflow,” Ethan said. “The idea was to show an outdated version of form over function.”

The quest to obtain a mannequin arm on such short notice was as strange as you’d expect. “We went to a secret underground mannequin warehouse in Oakland on a Saturday morning,” Kevin said. “It’s called Mannequin Madness and is run by a husband and wife who’ve been doing this for years. It was behind an unmarked door in an industrial strip mall, and there were just mannequins everywhere. So that was weird and awesome.” 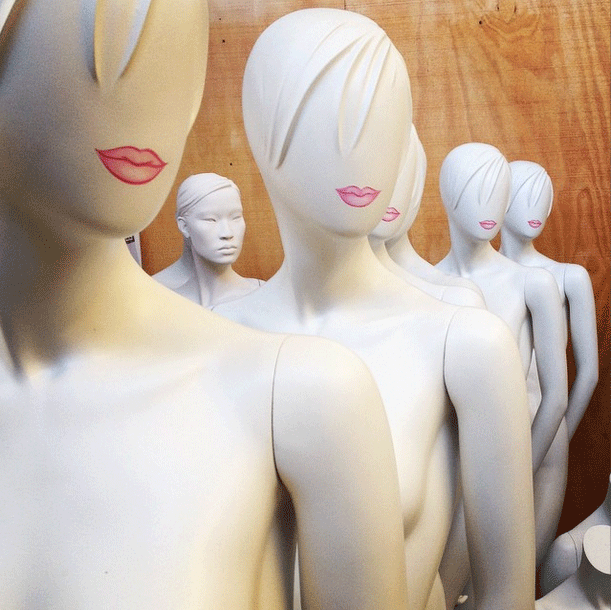 The pretty ladies of Mannequin Madness.

The talent
The decision to make C-TRON a more static character resulted in some significant changes.

“Originally, the plan was to put the dramatic weight on this C-TRON character and have him be the one to make the jokes and have the personality that carried some of the story,” Ethan said. But during casting, the team stumbled upon a comedic gem who helped tie the narrative together: Stephen Laferriere. “Stephen is this great improv talent who was really quick with the jokes and played really well with a static version of the character,” Ethan said. “We didn’t really know what we were looking for until we found him.” 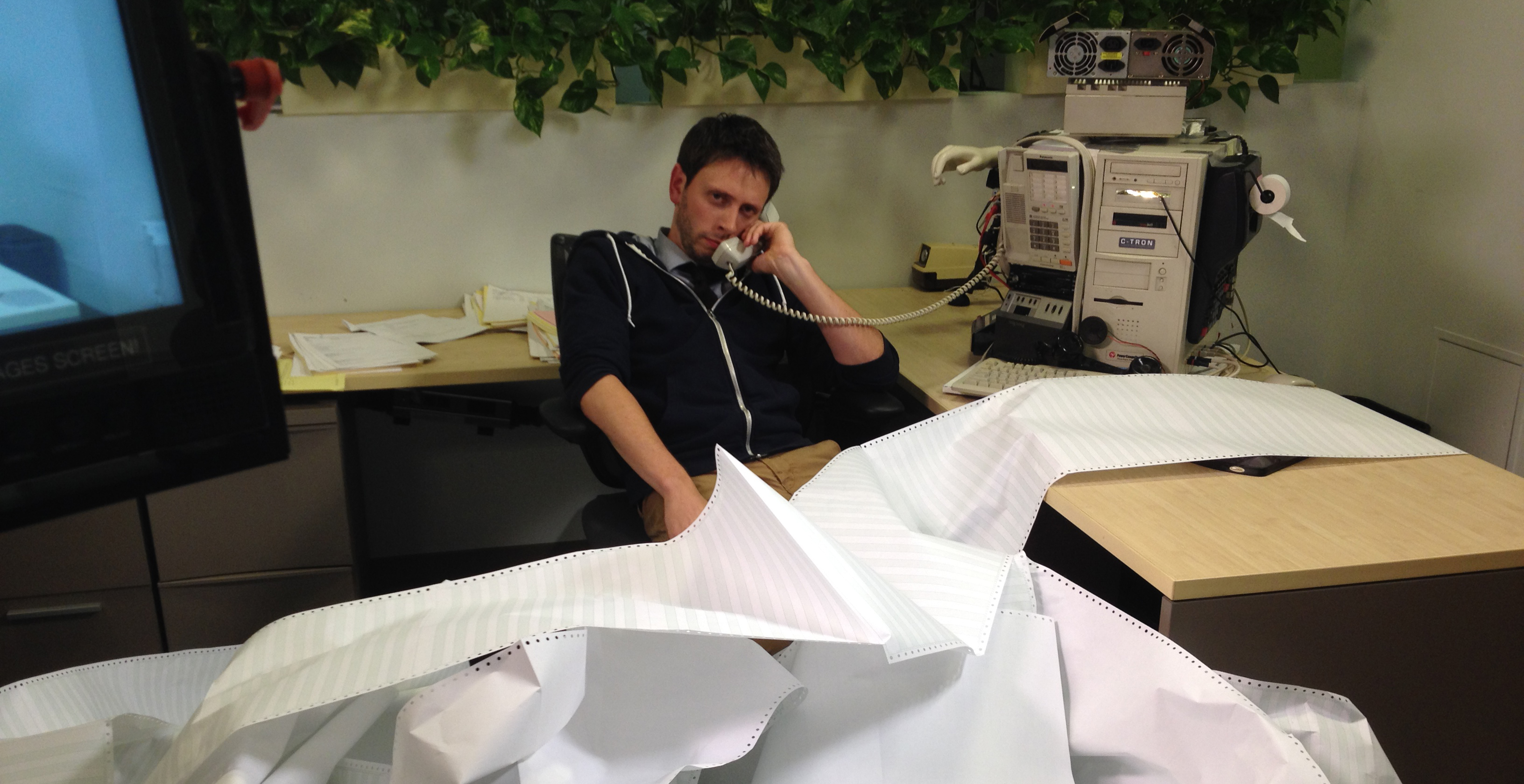 Stephen, who is featured alongside C-TRON in the videos, is a film, commercial and stage actor based in San Francisco. The campaign’s storyline was relatively undeveloped prior to casting, and Stephen’s comedic chops helped inspire much of the creative vision and direction. “Suddenly we had this guy come in who was hilarious and a natural comedic talent,” Kevin said. “It was like there was a color we didn’t know was going to be in our palette that we could paint with.”

The shoot
Filming took place at Degenkolb Engineers in the Russ Building in downtown San Francisco, which had an appropriately “Office Space”-like office space. The muted decor was essential to setting the scene and creating an antiquated environment—the only thing missing was a red Swingline stapler.

With a tight deadline looming, a bit of creative ingenuity was required. C-TRON’s sophisticated motion mechanism consisted of Ethan and creative project manager Jeanie Mordukhay taking turns puppeteering the robot head with a wire contraption. “It was like a set of horse’s reigns,” Kevin remarked. 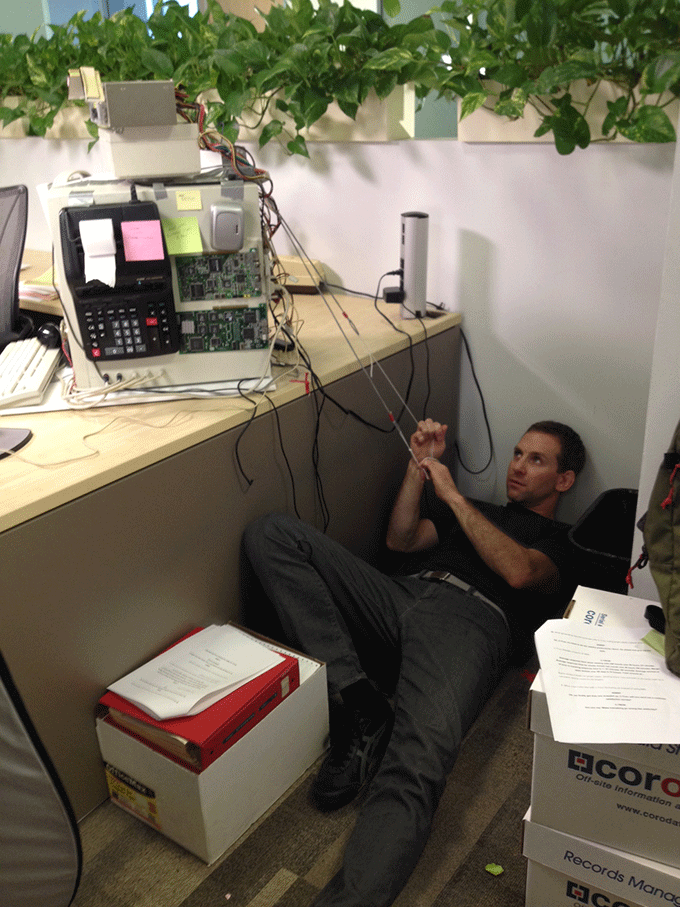 “We had all these grand ideas of C-TRON lighting up and talking and being remote-controlled, but it just wasn’t going to happen,” Ethan said. This happened instead.

Even certain props had to be manufactured on the fly. “In the 30-second spot, at one point Stephen’s holding a fire extinguisher and blasting the thing. That was actually from his audition; he pretended that C-TRON caught fire and pantomimed the whole scenario,” Kevin said. “So I went on a maniac mission to design and build a fake fire extinguisher.” The final product was surprisingly convincing–if we do say so ourselves. 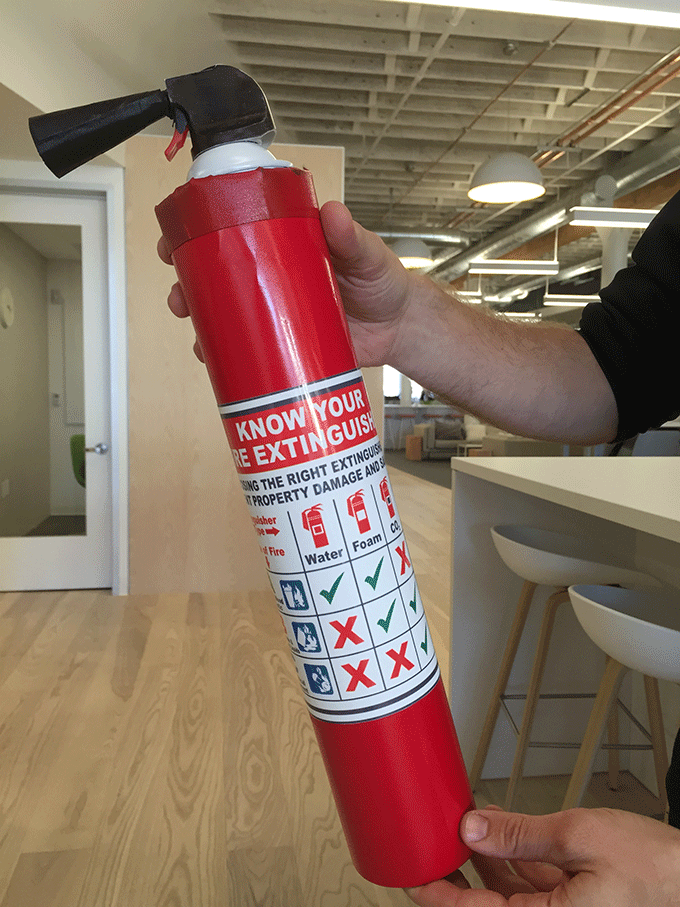 “We made that fire extinguisher out of canned air, a couple of Pringles cans, a picture that we downloaded off the Internet, some red spray paint, and some black construction paper.”

The vision
The modern consumer is constantly bombarded with ads and commercials, so making your content stand out among the clutter is as challenging as ever. “We have to cut through the tons of noise that people are faced with,” Kevin said. “We could be making super business-y, jargon-y type stuff about optimizing and synergizing, but instead we’re doing something that we think will delight people a little bit.”

At the end of the day, the goal is to capture people’s attention in an interesting and engaging way. “We want to show respect for the humanity of our audience,” Ethan added. “Our perspective is that we value your time and intelligence and we want to tell you a good story. That’s the ethos of the company.”

Are you into...robot chat? Learn more about how Barkbox is using ai chatbot